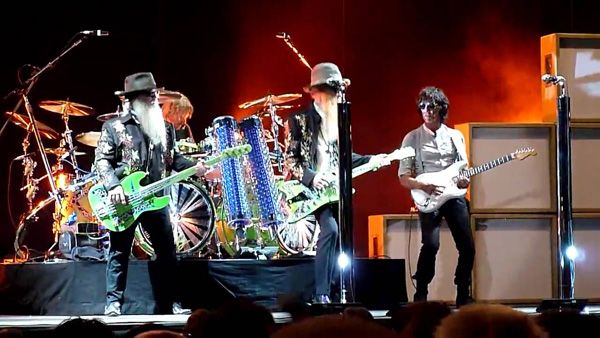 Episode 22 nearly didn’t happen, it became episode 23 for some reason.  It looks like the time travel theme that signals the start of every show moved me ahead a week. Fortunately, I was able to change all the S5E23s to the correct S5E22 before everything got uploaded and created an irreversible hole in time.  The show kicked off with The Doors and  ‘L.A. Woman‘ and it was like cool running water, Jim Morrison giving us a glimpse once again of what could have been if he was still around today.  From a chilled laid back nearly 8 minute intro, we smashed a little Volbeat action and moved through Phil X and The Drills, Skid Row, and something off the new Ghost album Impera.

We made a bit of a fuss about Johnny Depp and celebrated his vindication by the courts this week by playing his band Hollywood Vampires and a track called ‘Who’s Laughing Now‘.  We washed that down with some Jeff Beck jamming with ZZ Top on ‘Rough Boy‘.  We had Classic Rock came from Black Sabbath, ACDC, and Led Zeppelin, prog type stuff from Threshold and Coheed & Cambria, and Metal from Sepultura, Death Angel, and Opeth.

The SA music was well represented by The Devil’s Party Band, The Diamond Dogs, and Hellcats.  Tom Petty and John Mellencamp mellowed the show out a bit, I tried to revive it with some UK Punk, courtesy of The Stranglers and Stiff Little Fingers but ultimately the show moved back to a chilled ending with a fantastic love song about a guitar off the brand new Def Leppard album Diamond Star Halos.  Anyone who has played a guitar their whole life will fully understand the sentiment and the mini solos.  The show was dedicated to Athol’s son Phoenix who turned 25 and celebrated by listening to The Story of Rock and Roll as one should.