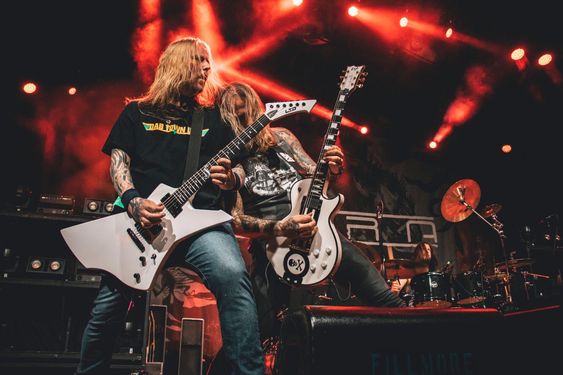 Episode 35 aired on 1 Sept 2022, on Rebel Rock Radio at 19h00.  For once there were no technical problems on startup, everything connected and everything worked.  First up we had Krokus with their classic track Long Stick Goes Boom, off 1982’s One Vice at a Time.  Next up Biters with a track called ‘1975’ and then a quick track from Herman Frank before we shifted direction with some Faith No More.  From there we checked out ‘Baptised in Muddy Water from Ayron Jones and a track off the Ronnie James Dio Tribute tiled This is Your Life.

We spend a bit of time in the ‘Qs’, not home affairs, the letter ‘Q’, with Q5 and Queensrÿche and ‘Steel The Light‘ and ‘Jet City Woman‘ respectively.  Seether made a welcome return with ‘Fake It‘ and Flatfoot 56 made their debut on TSORR.  The show moved into party mode with Rob Zombie and ‘Living Dead Girl’ (who you can meet behind the counter at any Municipal Traffic Department near you).  Buckcherry and ‘It’s a Party’ off All Night Long, kept the throttle open.  We did the usual mix, slammed in some metal with Machine Head, ‘No Gods, No Masters’ and Killswitch Engage then into the UK punky stuff, The Boomtown Rats, The Jam, and Stiff Little Fingers.  The new stuff came from Five Finger Death Punch, The Halo effect, Slipknot, and Soulfly.

We checked out Cape Town-based Infanteria who featured a few months ago with a nearly 8 min masterpiece called ‘Swansong‘ off their 2022 release Patriarch.  Then another brand new album from UK-based NWOBHM stalwarts Desolation Angels who have South African metal merchant Clive Pearson with them on bass.  We didn’t manage to play the new Parkway Drive because there just isn’t enough time, that tells you something about the amount of good new metal being released at the moment, “didn’t have time for Parkway Drive”, jesus.

We hit the local stuff with Jasper Dan and Black Bone Nation and then moved to a special level with ‘Warm Machine’ from Bush, you had to be there moving through the night at 3 am in Black Adder II to understand the power of that track.  Good times, really good times.  Anyway, the show had to die so we ended off with US punk from Green Day and then ‘Helena‘ the classic track from MCR.   We went out heavy with The Halo Effect featuring Jesper  Strömblad ex In-Flames, Slipknot’s new track ‘The Chapeltown Rag‘, and Soulfly with ‘Ancestors‘.  Check it out, and spread the TSORR podcast far and wide please.