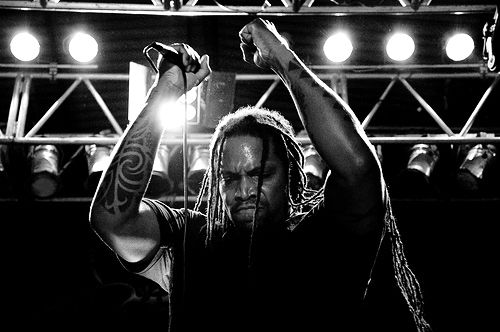 Episode 38 kicked off at 19h00 on Thursday 22 Sept 2022 on Rebel Rock Radio.  First up Guns ‘n’ Roses with ‘You could Be Mine’. from back in the day when G ‘n’ R were the hottest band in the world. Next up Rainbow, off Rising and the opening track ‘Tarot Woman‘.  It was pretty much hard rock with bands like Tesla and The Four Horsemen all the way through until some Jethro Tull which made a nice change.  The track we heard was ‘One Brown Mouse‘ off Heavy Horses.  From there we went bluesy with Samantha Fish and Frank Marino.  The requests for more led to Joe Bonamassa with ‘Hanging on a Loser‘ off his latest album Time Clocks.

We checked out a real biker, biker band in the form of Chrome Division and then went heavy with Sepultura and their cover of Motörhead’s ‘Orgasmatron’ with the amazing Derrick Green on vocals.  I did screw up a bit, I wasn’t sure if Derrick was Brazilian, he isn’t, he’s American, born in Cleveland in 1971, six foot five weighing 110 kg.  That should fix the bungled and botched attempt on the record.

The next bit of the show I really enjoyed. Two metal bands I had never heard of one called Sumerlands and another called Claymorean got some airtime.  They are playing what is known as classic metal.  Claymorean are out of Serbia and Sumerlands I am not sure.  We will be hearing more from these band in the future.  Thanks to Loudwire for those two gems.  New stuff came from Ozzy Osbourne, Parkway Drive, and Desolation Angels.  We got our weekly dose of UK Punk courtesy of Stiff Little Fingers, The Clash, and The Jam.

Because there is so much good metal out there right now we kept on going with a new track from In Flames called The Great Deceiver, this is a huge return to form in my view.  There was time to visit the ‘80s with Mõtley Crüe and ‘Girls, Girls, Girls‘ and then some Kiss off Lick It Up and ‘All Hell’s Breaking Loose.  Hole and The Pretty Reckless represented the ladies and then it was time once again for Rush.  I am currently Rush befok and there is no obvious sign of abatement.  It feels like we’ve had Rush for 7 weeks in a row now.

The wheels came off a little bit at the end, some bottled-up anger and a tribute to the Rebels at Rebel Rock Radio who work hard doing what they love whether people listen to it or not.  So we went out heavy, heavy with Arch Enemy, Dirty Little Rabbits, and Eye of the Enemy.