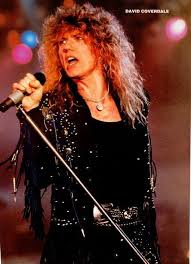 Here’s a blast from the past for you, you really should take a little nostalgic trip here. When this came out it was massive! It was one of the most requested video’s on MTV at the time and I don’t think it was because of Whitesnake or David Coverdale. Call me cynical but I reckon it was more because he let his chick, Tawny Kitaen use his bands video’s as a giant self glorification ego project to further her modelling career. It definitely worked but it didn’t endear ‘The Cov’ to the rest of the band. Anyway that is all by the by, the song is great and probably one of guitarist John Sykes crowning glories. Yeah I know everyone will say it’s a Zeppelin rip off and maybe it is but it’s still a great song and if you don’t think so then there is always Tawny Kitaen.