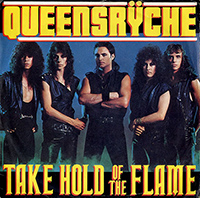 Take Hold Of The Flame

Queensryche came out of Washington in the early 80’s and the release of their album The Warning heralded their arrival as a band to watch.  There was a lot going on  that album and I listened to it a lot but I just couldn’t quite connect in the way I really wanted to.  It was like I didn’t love it, except for ‘Take Hold of the Flame’ which was far away the best track.  They stumbled badly with Rage For Order and started dressing like pansies, the album was horrible.  Luckily for the world Geoff Tate went out one rainy night for smokes and saw a church on his way back.  Something made him go inside and once he sat down in those oppressive wooden pews he had an epiphany and the entire Operation Mindcrime album concept just popped into his brain.  It is not often I am grateful for the church 🙂

I posted this because they are such a good band live, the musicianship is first class and initially there was such good chemistry in the band. Once they started to have internal problems it fell apart. To my mind once Chris de Garmo left it was never the same. I’ll celebrate Queensryche for 3 of the best albums ever made by any band and leave it at that.