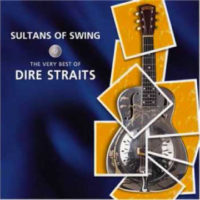 In The Story of Rock and Roll I talk about Dire Straits a lot and in Chapter 4 it’s all about what a good album Making Movies was.  I switched out the songs here because So much of what Dire Straits started out to be got lost in the 80’s in the MTV years.  They were a band that just became too big despite the fact that they never wanted to be.

I first heard Dire Straits when my mother bought their eponymous debut album. I am not sure how she heard of them but that album became a mainstay of future listening. Dire straits were another band that just didn’t fit in, they came out of the Punk era as it was morphing into New wave but clearly they were a throwback to the old days when musicians could really play. Mark Knopfler will always be one of my favourite guitarists and a good reason to throw myself off a cliff when I try and play his stuff.