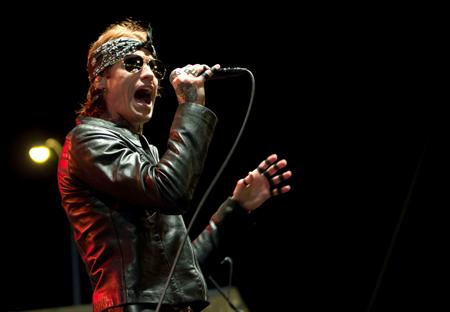 At the end of the 20th century there was a bit of a good time party rock is dead feel. The Nu Metal thing was starting to happen and all that shit was great but some of it was really depressing and miserable, like it had a grunge hangover. Out of seemingly nowhere I got to hear Buckcherry and all was right in the world again. These guys were back onto the banging chicks snorting crack style of party music which seemed to have died with Van Halen, Guns ‘n’Roses and Motley Crue.

The thing I loved about Buckcherry was that time seemed to have stood still for them, they were ploughing the G ‘n’ R, L.A. Guns, Motley Crue furrow and it just sounded awesome. Every song was a blitz of guitars and that swaggering macho vocal that we came to love through the 70’s and 80’s. And it sounded so fresh. Josh Todd had all the old Jagger, Steve Tyler moves and that whole sinewy snake god thing down perfectly. The songs are great and the whole album was perfect for what they were doing. It was released at exactly the time when the world really needed it and it gave us hope.