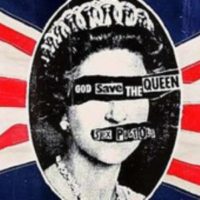 God Save the Queen

”I started the album, volume up full and the opening chord to ‘Anarchy in The UK’ nearly made the welding crack on the burglar bars.  The Pistols were just brilliant, mainly only three chords but each chord was thick, crunchy and necessarily over-overdriven.  I was in heaven: ‘God Save the Queen’, ‘No Fun’, ‘Pretty Vacant’, ‘Silly Thing’.  I was just through the second listening of ‘God Save the Queen’ when in walked the Fascist Regime.  The Sex Pistols saved me I reckon because Dad was expecting a contrite teenage son who would be amenable to becoming a functioning member of society, but what he was faced with was a wall of blistering guitars at the kind of volume that Satan himself would probably appreciate.”  – The Story of Rock and Roll – James Daubeney

The Sex Pistols had a huge impact on the UK. They were more than a band, they were a catalyst for a collision between existing society and disaffected teenagers. Johnny Rotten swore on TV and the UK press went crazy. Headlines screamed out about these ”foul mouthed yobs”. Hundreds of bands were formed by teenagers who suddenly realised that you didn’t have to be as good as Jimi Hendrix or Jimmy Page, you could just belt out 3 chords and vent your anger. The energy was incredible and it changed everything for a while. Record companies scrambled to sign punk bands and suddenly everyone else was a boring old fart.