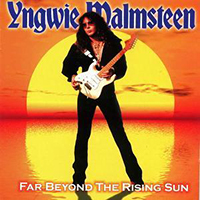 Far Beyond The Sun

”Yngwie Malmsteen was phenomenal.  He came out of obscurity from Stockholm after he sent a tape to Mike Varney of Shrapnel Records who was releasing all these incredible shred guitarists.  Guys such as Tony MacAlpine, Vinnie Moore, Paul Gilbert, Jason Bekker and Mary Friedman.  Malmsteen, however, was different and was totally original compared to these other guys.  He had his classical roots in stuff like Paganini and his rock roots in Richie Blackmore”.

The best way to appreciate Yngwie is to watch him live. He is truly amazing. His style certainly isn’t for everyone and it gets a bit much sometimes but in small doses there is just no-one better. My biggest wish with really good guitarists like Yngwie and Mike Schenker is that they would get better vocalists and songwriters into their bands to balance out the brilliance of their playing.