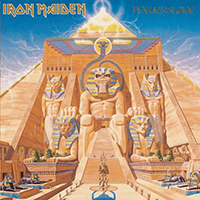 Iron Maiden were on a roll by 1984, Bruce Dickenson was firmly entrenched in the band and they had completed the mammoth World Slavery Tour which was one of the largest and most complex tours undertaken by any band ever.  By 1984 Iron Maiden were pretty much a household name.

Aces High was very typical of the type of video Maiden would release. They were getting bigger budgets for video now and with MTV at its peak they were getting airplay on television that a band like Maiden wouldn’t normally expect to get. The guys knew that at the end of the day ‘Time is fleeting, touring takes its toll’ MTV may have been hot in 1984 but the way Metal bands would have to do it wasn’t going to change: Album, Tour, Short break, Repeat.