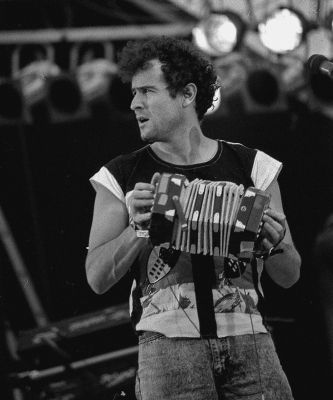 It’s hard to put into words the bitter sweetness of being front row and watching Johnny Clegg for probably the last time on his farewell tour last night (11 Aug 2017). I discovered Juluka in 1980 when a house master, known as Ballhair, told me about the album Universal Men. Ballhair has been discussed disparagingly in The Story Of Rock And Roll. He got seriously slated for his inability to realise that a pathological worship of Stiff Little Fingers was just a kid trying to express his love for the primal force of nature that was Punk Rock. Pure love of Rock and Roll, nothing more nothing less. That being said Ballhair took the time when I first met him to tell me about Juluka and Johnny & Sipho. He actually felt strongly enough about them to record the album for me and give me the tape. For that I will always be grateful because I listened to Universal Men, and about 6 months later, African Litany over and over and fucking over again. They seemed to hold the key to unity, to making me want to know about places, cultures and people I was segregated from.

Juluka had a major impact on me. Johnny taught us that we can all get along, he taught us that people with common interests can find each other even in an oppressive regime where the Dutch Deformed Church twisted and perverted the freedom of all in SA. Johnny made us proud and in my feeble 14 year old mind I really thought that what he was doing was the way it was going to be. So it was bittersweet last night to see him as an older man because in that moment of clarity watching that show it felt like we had failed. Not Johnny personally but we failed to implement what he stood for all those years ago.
Back in the 80’s at Free People’s concert at the Ellis Park where thousands of us gave the Nats the finger and screamed our heads off when Johnny and Sipho mine-danced that stage flat we were one. In the dusty sand of the Bophuthatswana Independence Stadium where 4 of us white kids stood shoulder to shoulder in the red dust of Mafikeng with a full stadium of non-white people and we danced and sweated as one seething mass of humanity we were one. No-one thought or gave a fuck about anything except the music of Johnny Clegg, Sipho Mchunu and the rumbling bass of Gary Van Zyl, (I forget what the drummers name was but he was hit, a hitting that snare – some of you will know why that is funny on a few different levels). On that one hot African summer afternoon nothing else mattered, we were one under African skies.
When I listened to Johnny speaking Zulu last night and heard his total command of a language and understanding of a culture that is foreign to me I felt very sad. Sad because this country is all fucked up and the inability of both sides to embrace the wonders of Africa hasn’t happened as I am certain a 27 year old Johnny Clegg would have wished it had. I can say without a doubt that 37 years ago I was full of hope for South Africa and a I thought that we’d be able to pull this off. Last night bought it all home, we have fucked it up. All of Us. Where did the time go ?