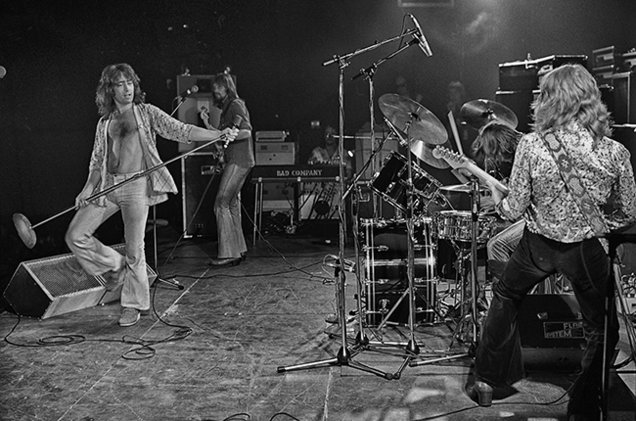 Out of the ashes of Free came Bad Company. Free had done well but in-fighting and the usual substance abuse issues that plagued most bands of this era caused Paul Rogers and Simon Kirke to walk away and from Bad Company in 1973. If ever a band had an excellent pedigree Bad Co was it, two ex members of Free, and ex Mott The Hoople guitarist and a bass guitarist who cut his teeth in King Crimson. This ‘super group’ was them signed to Led Zeppelin’s Swansong label and managed by the legendary Peter Grant. I first heard Bad Co in a dormitory called ”3- Up” at Potchefstroom High School for Boys back in 1979. You can read about Potch in The Story of Rock and Roll but in short for a 12 year old ‘new boy’ who’s job as a skivvy was to clean his matrics shoes, make his bed and tidy his locker these tasks were just an menial backdrop to what was really happening in my head while I did my chores in 3-Up every morning and evening. The 3 matrics who inhabited the dorm had a good collection of what would now be called 70’s Classic Rock and one of these albums was Straight Shooter by Bad Company . I was so impressed with this album that the owner even allowed me to hold the album cover and soak up the magnificent Hipgnosis artwork. The two tumbling dice were imprinted on my mind and until the next big thing came along they would play that album every day. It is one of the best examples of Classic rock you can ever hear.

This video really stands up well over 40 years later. Bad Company had the songs and they had the talent, for a short few years with the original line-up they were unstoppable. Paul Rogers epitomised the 70’s front man look that Robert Plant had perfected for everyone else to follow, tight pants and open shirts, long hair and a macho swagger. He didn’t go for the screaming high notes like Plant & Gillan but to me he had a far richer bluesy voice. Rogers tended to stay in a narrower range, his delivery was perfect and his timing always impecable. Simon Kirke is a roll model for many drummers and Boz Burrell on bass exerted a quiet behind the scenes uber cool influence that you only hear about if you dig deeper into their history and see a few documentaries. Basically he was like a rock Cliff Burton, totally unique and his own man, different but irreplacable. My favourite part of this clip is from around [4:00] where Mick Ralphs does the outro solo and his Flying Vee is really busting up. It’s a perfect example of a 70’s rock band to leave in a time capsule for future civilisations.