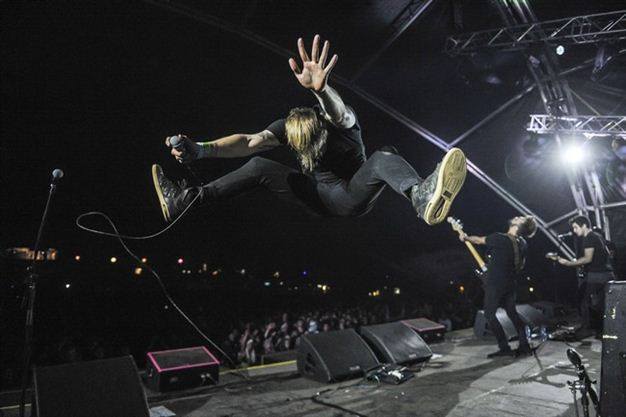 Pride is not something I am overly prone too, well I don’t think so anyway, but today I feel really proud and the reason is because of the launch of Francois Van Coke’s second solo album and how I felt watching this video. Now the success of FvC has fuck all to do with me because it’s all been his own Bloed, Sweet en Trane but I actually feel proud because I have been their through the years that are highlighted in this video. I have been there through the drunken times and through the mal gigs and I followed Fokofpolisiekar around for about 10 years hardly ever missing a gig. I am proud because since I first heard them I kept saying these guys are great, Francois is special, listen to this, listen to that, I have relentlessly promoted them and I feel great that Francois has done as well as I always believed he should have. The first time I heard them I knew without any shadow of a doubt that they would be huge, as huge as the narrow genre and the tiny population of rockers in SA would allow them to be. Against all odds they took it on, small town Afrikaans boys, singing in Afrikaans, playing their own brand of rock / punk / metal. They rose head and shoulders above every other band in the country and started a wave of wannabe’s. They were a band of brothers, all uniquely talented and complimentary, a true synergistic rock and roll hybrid. Without detracting from the brilliance of Hunter, Johnny, Snake or Wynand, in my opinion the reason they did so well is because Francois Van Coke is a uniquely special front man and vocalist. Very much like Ozzy Osbourne he did not have the text book golden voice that an Ian Gillan or Mark Haze or Axl Rose was born with, what he has it total charisma and unique voice that suits what he does. It’s that uniqueness, like with Ozzy that becomes such a huge part of a band, its why world class front men are gold.

I have a lot of stories about Francois and FPK in The Story of Rock and Roll but here’s one that isn’t in the book. I was living back in JHB and was working hard, not getting out a lot for gigs and generally the weekly pilgrimage to find bands to watch every weekend was coming to an end. On this particular night I was with my guitarist buddies Wes and Malcolm at The Knight and Dragon. We’d been there for hours but decided to fuck off down to Cool Runnings to have a last 10 drinks a bit closer to home. When we got there Van Coke Kartel had just finished a gig and I hadn’t known they were in town. Malcolm and Wes knew nothing about FPK or VCK but they knew they were huge in Cape Town and huge with me. When I got to the bar Francois was there surrounded by a whole lot of miscellaneous hangers on and fans. I almost didn’t say hi because he was swamped. It had been about 2 years since I’d last seen him so I didn’t really expect him to remember me. I bought beers for me, Wes and Mal and as I was going passed Francois I said howzit. He stopped talking to everyone and just grabbed me by the shoulders, ”James” ! he shouted giving me a huge grin. Then he planted a huge kiss on my mouth and announced to everyone around, ” Hierdie is n’ pragtige, pragtige mens” and gave me another kiss on the mouth and a big hug. It was such a classic moment, one of many I have had around Francois and the various bands he brings his magic to.

So today I am proud watching this video because it’s all about growing up and getting through the crazy years, sticking it out, milk, mud, shit or blood and then, as Francois says ”Dit Raak Beter (As Ek Ouer Raak). All I can say is well fucking done buddy you are special and you deserve all the success you get. I urge you all to give Fokofpolisiekar, Van Coke Kartel and Francois’s solo stuff a listen, if you look at this video and you just see how rock and roll those old gigs were, there was nothing like seeing FPK live, to this day I don’t think anyone was better. I truly mean that.